The Subaru Legacy is a mid-size sedan and wagon that provides impressive passenger space, high-tech convenience features, and standard all-wheel drive. On the road, there aren’t many in this segment that can compete with the Legacy’s responsive ride and sure handling. Choose a certified used model for additional security. To become certified, a Legacy must first pass a 152-point inspection to ensure dependability. When you purchase a certified used Subaru, you also enjoy on-demand roadside service and a seven-year/100,000-mile Powertrain plan. 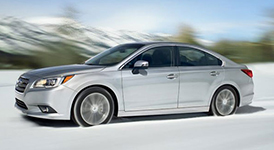 The new Subaru Legacy sedans are roomier than ever before, offering impressive passenger and cargo space. They’re a great used car to pick up. From the driver seat, outward visibility is excellent. Inside, the sixth-generation cabin is upscale and refined. It also gives you access to high-tech convenience features. With the navigation system, it’s easy to get wherever you need to go. Bluetooth connectivity makes it easy to stream music from devices. The navigation system can be controlled like a tablet, making it easy to explore new territory. 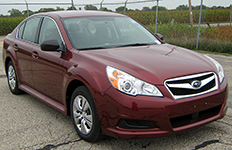 The fifth generation used Subaru Legacy offered a roomier cabin and modern style. The 2.5i models come with a 2.5-liter horizontally opposed four-cylinder engine that produces 170 horses and 170 pound-feet of torque. Choose between a six-speed manual or continuously variable transmission for a smooth, refined ride. The 2.5GT Legacy comes with a turbocharged version of the base engine, offering 256 horses and 247 pound-feet of torque. This engine is paired with a five-speed automatic transmission.

Inside, these models were stocked with a long list of comfort features. The tilt-and-telescoping steering wheel made it easy to find the perfect position behind the wheel. Leather upholstery set a luxurious tone. Bluetooth let you make hands-free calls. The rearview camera made backing up a snap.

The fourth generation used Subaru Legacy were available as both sedan and wagon at the outset. In 2008, the wagon was discontinued. You could choose between two trim models, the 2.5i and the 2.5GT. The former ran on a 2.5-liter boxer-4, which generated 168 horsepower. The latter got a turbocharged version of the same engine, boosting output to 250 horses for a swift, smooth ride. 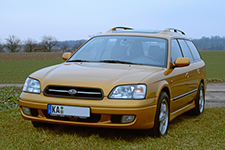 If you’re looking for a rugged ride, test-drive a third-generation used Subaru Legacy. These models were offered in base L, sporty GT, and premium GT Limited trims- all of which were well stocked with convenience features. Under the hood, a 2.5-liter four-cylinder engine churned out 165 horses for a smooth, responsive ride. 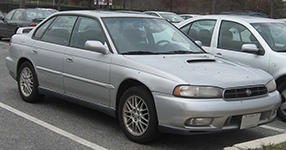 These models remain a great pick for drivers who often travel over icy or wet roads. This generation is known for creating the Outback wagon, which began as an SUV version of the Legacy. 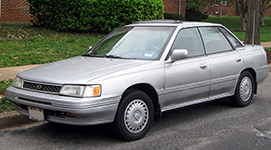 When the Subaru Legacy first arrived, it was unlike anything Subaru had ever created. It was available as a five-door wagon or four-door sedan. The first Legacy introduced Subaru’s new engine, a flat-4 series known as the Subaru EJ.