The used Jeep Patriot is an excellent small crossover SUV that’s big on power, off-road utility, and modern convenience. It also comes with an affordable price tag, making it a great pick for a wide range of buyers. The Patriot combines family-friendly seating with adventurous performance. Its four-wheel-drive systems can tackle just about anything you can throw at them. The Patriot delivers incredible utility, giving you the power to tow up to 2,000 pounds. Check out our used Jeep Patriot guide to learn how these crossovers have changed over the years. 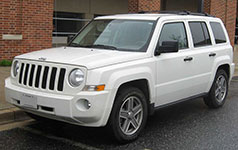 Inside, the used Jeep Patriot is your pick for modern comfort and support. With plenty of space for up to five passengers, the whole family will enjoy your next cross-country road trip. For increased luxury, look for features like leather upholstery and a sunroof. The Patriot also keeps you cozy during the winter months, thanks to its heated front seats. Behind the rear seats, there’s substantial cargo space for all your daily necessities. It’s easy to expand the cargo hold – simply fold the rear seats down and you’re ready to go.

This rugged crossover delivers an excellent array of tech features. Many used Patriots feature an in-cabin Wi-Fi hotspot, so you can stream music without dipping into your smartphone data plan. Jeep also provides one of the best infotainment systems in the business, Uconnect. It includes a crisp, responsive touchscreen and voice controls that give you quick access to important apps.

When it comes to safety, the Patriot delivers. The Insurance Institute for Highway Safety gave the Patriot its top score of “Good.” Used Jeep Patriots include safety features like traction and stability control, giving you premium control over problematic weather conditions. Antilock brakes provide strong stopping power when you need it most. A variety of airbags mitigates passenger injury during a collision.

Throughout its run, the Jeep Patriot has always delivered substantial engine output and premium performance. Unlike many competitors, this small crossover can travel through rugged terrain without a hitch. It offers a range of four-wheel-drive systems, including the Freedom Drive II, which is our pick for truly adventurous rides. You can also use this crossover to tow your fishing boat to the nearest hotspot. Depending on configuration, the Patriot can move maximum loads of 2,000 pounds.

As you shop for a used Jeep Patriot, you may notice that there have been a few changes over the years. In 2016, for example, Bluetooth connectivity and satellite radio became standard equipment, enhancing infotainment options. That year, Jeep also introduced the rearview camera, so you can back out of unfamiliar lanes without incident. In 2014, you could get the Patriot with a new six-speed automatic transmission that provided smooth shifts and impressive response to driver input. Front-side airbags also became standard equipment that year. In 2012, the Patriot’s continuously variable transmission was revised to deliver enhanced performance.