The used Jeep Liberty is an athletic compact SUV that delivers impressive off-road capabilities, interior comfort, and modern tech features. The Liberty will take you just about anywhere you want to go, whether that’s around town or down your favorite trail. It also tows up to 5,000 pounds – a rarity in this segment. Inside, this compact SUV speaks to your need for style and comfort. All in all, the used Jeep Liberty is the perfect pick for drivers who crave a modern blend of interior luxury and rugged power. 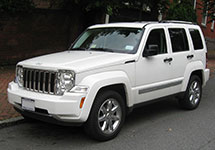 The second-generation used Jeep Liberty comes stocked with a wide range of comfort and convenience features. The new model is larger than that of the previous generation, with plenty of space for up to five passengers. Up front, the Liberty is big on shoulder room. In back, passengers will find plenty of room to spread out for the long haul. The cargo space has also expanded, now offering 64.6 cubic feet of maximum cargo space – more than enough for all of your favorite sports gear.

These used Jeep Liberty models also deliver impressive on-road refinement. The updated suspension responds well to driver input, getting you up to speed in a snap. When it’s time for a little off-road adventure, the Liberty delivers in a big way. This compact SUV rolls through all kinds of rugged terrain, making it a great pick for your next camping excursion. Look for two different four-wheel drive systems – the part-time Command-Trac or the full-time Selec-Trac. Under the hood, the Liberty’s V6 engine churns out plenty of power. Properly equipped, the Liberty can tow max loads of 5,000 pounds – a rating near the top of its class.

You’ll also love the Jeep Liberty’s excellent safety standards. In government crash tests, the Liberty earned a perfect five star rating for both front- and side-impacts. The Insurance Institute for Highway Safety gave the Liberty its top score of “Good.” Antilock disc brakes provide the means for strong stops – even from high speeds. Electronic roll mitigation helps you maintain a safe ride as you cruise around corners or down winding roads.

Jeep introduced some new tech features over the years. For the 2011 model year, shoppers could choose a touchscreen media interface for quick access to digital music storage and other apps. The navigation system helps you explore new territory without a hitch. The tire-pressure monitor display makes it easy to maintain the correct psi for optimal performance and fuel economy. 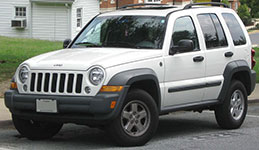 When the Jeep Liberty made its debut, it impressed drivers with its capable performance – both on-road and off. It was a true Jeep in every sense, traversing rugged trails without issue. Shoppers could choose between a four- and six-cylinder engine for varying levels of speed and fuel economy. The six-cylinder option proved so popular that, in 2006, Jeep dropped the four-cylinder engine altogether. Inside, the Liberty impressed with its unique style and roomy seating accommodations.